When it comes to keeping your newsfeed nice and clean, I have always adhered to the old Polish saying that goes: “Make your bed well so you will sleep well”. However, the recent situation on Facebook has been going against the original principle “bringing people closer together”.

My newsfeed started bursting with entries from old groups and pages I haven’t followed for over six years, and friends with whom I haven’t interacted with for even longer. I also thought that I managed to deal with Facebook games (it is enough to ban both games and invites) and nonsensical events (it is enough to just ignore them), but recently the mess has been only piling up.

I used to clean my Facebook regularly and took care of what appeared on my newsfeed. The rule was simple – you’ll see more content that you like every day; they will show you more of what you spend more time on; they will show more topics that you comment on the most, and in particular, the leading role will be played by the status updates of friends with whom you are closest with (of course, according to the algorithm).

Did they change these rules? No. However, Facebook started using the algorithm in a slightly different way, opting for “more valuable interactions.” This is why your newsfeed has turned into one big bulletin board lately.

Since what I have done so far is not enough – after all, on my newsfeed, I do not even see the posts that I could like, or discussions that would be interesting for me – I decided that with the sudden change of the algorithm I should change my approach to how I use Facebook.

Here’s my way to clean up your Facebook after the latest algorithm changes:

New order for the new beginning

So far, I was observing all of my friends. New invitation, one click, and you are friends. Basically, no one thinks about it, but when you add a new person to your Facebook friend group, you automatically add them to some kind of a subscription list.

No wonder you don’t see all the updates. Facebook, though a bit ironic in the current situation, is well aware that without some sort of algorithm filter you would drown in a sea of uninteresting posts written by thousands of close and distant friends. 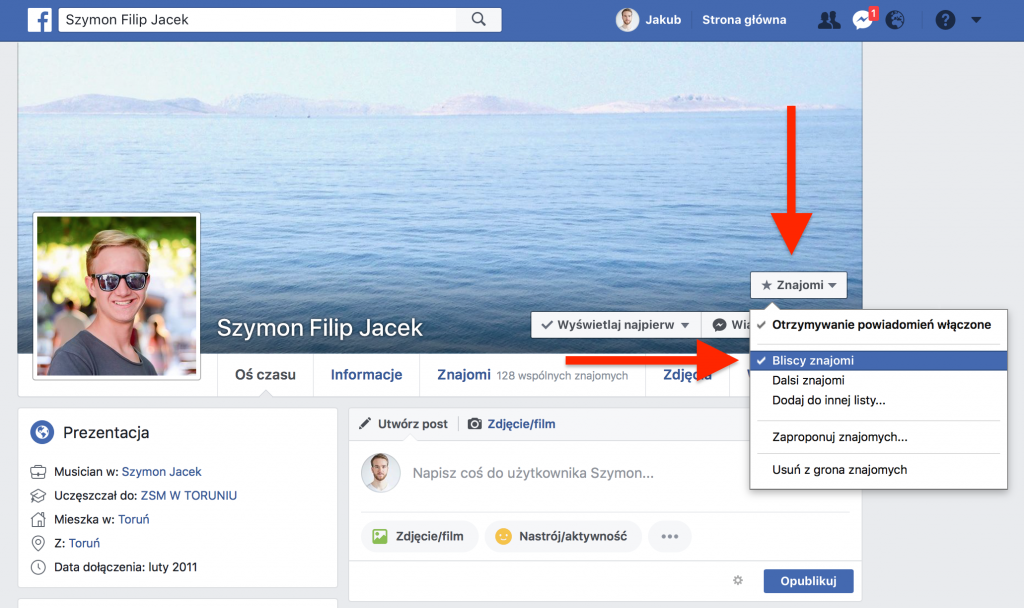 However, few people know that when adding a new friend you can choose how much of them you want to see in your feed. This way, you inform the algorithm of how much the person can stand above other posts from pages and friends not marked as “close friends”.

If you do not want to skip the posts of your friends whose updates you care about and whose posts you willingly read, you can boost your level of subscription to their page. To make sure you don’t miss their entries, just set up receiving notifications or showing status updates first. 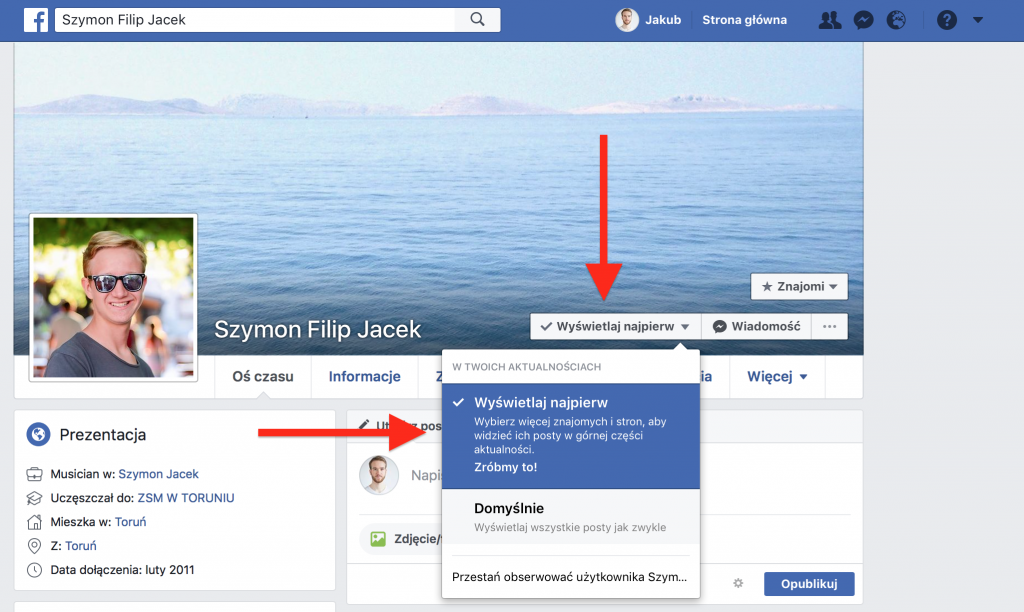 And what to do with someone you know, but on the contrary – you don’t really want to see their statuses every day? After all, it happens that you get an invitation from a business client, or a friend of your wife, or an old acquaintance whose posts don’t interest you much yet you cannot decline their friend invitation, even though you aren’t actually in touch with them.

All you have to do is in the same place where you can set up close friends, you mark next to their profile that you are “further friends”.

What about groups and pages?

If you didn’t know about this feature earlier and now you have hundreds of friends in front of your eyes whose posts you would like to put aside a bit – don’t panic, you don’t have to go through thousands of profiles one by one and specify how close you want your friendship to be.

On a daily basis while scrolling, when you see a post that is not necessarily interesting, simply click on the three dots in the upper right corner of the post and select the appropriate item from the list.

You can choose to pause its update for a month or completely remove it from the newsfeed. It is kind of similar to how “mute” works on Twitter, or the extension hiding all posts with a certain key word (e.g. to avoid spoilers). 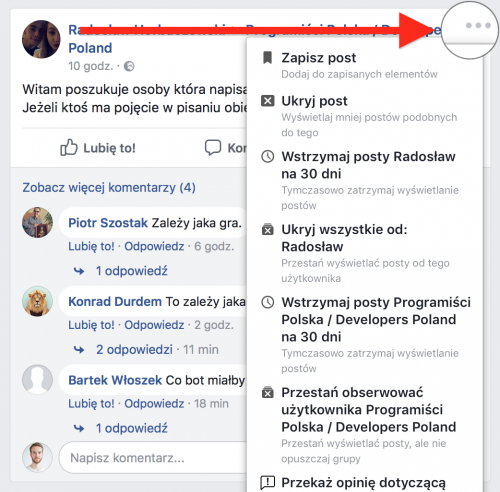 This is a great feature not only for friends or Facebook pages but also for groups (which you don’t want to leave but at the same time don’t want to see the discussion on your newsfeed).

Go to group settings and uncheck sending notifications about posts on the group, but this doesn’t solve the newsfeed issue yet. To get rid of unwanted discussions just use the same menu that I mentioned above and select “Stop following the user”, which in this case will apply to the entire group.

The whole process of tagging and (not) following your friends’ content is a relatively long but effective path. You will not manage to clean your Facebook within one day but if you do it successively you will thank yourself for it.

I turned off my newsfeed

You can also turn off your feed completely but it essentially eliminates the point of using Facebook as a social network. I tried it but quickly realized that it didn’t make sense. It’s not about browsing Facebook for hours but treating it completely practically – quickly find out what’s going on with your friends and stay in touch with them.

By the changes made in the Facebook algorithm that affects us today, Facebook wanted to increase our engagement and help us stay focused on the relationship between users, rather than users and Facebook pages (which was the case before the update). By excluding news (you can find a Google Chrome extension for everything), you make this communication only one-way, which in my opinion turns over the idea of ​​a social networking site that is based on interpersonal interactions.

For these to be possible, we need to establish a certain order.

Without it, we ourselves will get lost in what we see on our feeds and no algorithm optimizations will help here.

Perhaps the change I am writing about has not appeared on your account yet – and that is good for you. You still have a moment to prepare for this chaos. I have been testing my own way since the first signs of Facebook changes appeared, and after a few weeks I feel a definite improvement.

Not only do I not waste my time scrolling through the abundance of information by only reaching a limited number of people, I see the content that actually interests me and brings with it the value I care about. While categorizing your friends and choosing notifications settings may sound a bit harsh, it actually works quite the opposite.

The algorithm is just a piece of code that even Facebook employees do not fully understand (they even have a special cell that focuses on researching what their algorithm does and what decisions their algorithm makes). That’s why we have to show it what we want to see on our boards. It depends on us how “social” we want our Facebook to be.

I’m here to help you. If you haven’t found an answer to your questions here, contact me on 696 416 074, write me an e-mail on contact@jakubjacek.pro or use the form If you’re convinced to work with me, complete marketing brief first.

Complete a brief
Message me
Partners

You can find out more about which cookies we are using or switch them off in settings.

This website uses cookies so that we can provide you with the best user experience possible. Cookie information is stored in your browser and performs functions such as recognising you when you return to our website and helping our team to understand which sections of the website you find most interesting and useful.

Strictly Necessary Cookie should be enabled at all times so that we can save your preferences for cookie settings.

If you disable this cookie, we will not be able to save your preferences. This means that every time you visit this website you will need to enable or disable cookies again.

This website uses Google Analytics to collect anonymous information such as the number of visitors to the site, and the most popular pages.

Please enable Strictly Necessary Cookies first so that we can save your preferences!